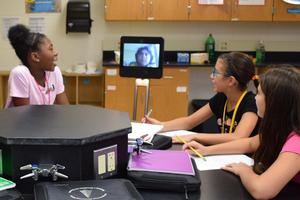 Students experience a wide variety of emotions when it comes to attending classes.
Some look forward to the thrill of completing a project or learning something new, while others enjoy the chance to work alongside their peers. And yes, there are even those children who dread waking up early to beat that morning bell.
The one common theme across nearly all of these students, however, is that most take the opportunity to go to school for granted. All kids have days when they cannot wait to get-to or get-home-from school, but few have ever considered what life would be like if attending school was not an option.
That’s the scenario that Central Middle School sixth-grader Max Castillo faces each and every day.
With three rare genetic illnesses that make his gluten allergy extremely dangerous, Castillo doesn’t have the option of attending school worry-free. If he comes into contact with the same desk another student touched after eating a doughnut or muffin, for example, it could – and has before – put him out of school for months.
In an effort to prevent this situation from occurring, District 124 has purchased a mobile robot that gives Castillo the opportunity to be “part of the class” without leaving his home.
“When considering the best way to approach Max’s unique situation, we wanted to do everything we could to ensure that he had the opportunity to have that true middle school experience, the same way other students in the District do,” said Veda Newman, D124’s Director of Student Support Services who initiated the exploration of purchasing the Beam robot.
“In addition to enhancing Max’s ability to learn in an environment where he feels safe, it also incorporates a social aspect to his day-to-day experience, which will lead to a more well-rounded education in the long run."
The mobile, 40-pound and 4 ½-foot robot travels from class to class with the help of an aide. The Beam broadcasts classes to Castillo, and his face is visible on the robot’s forward-facing screen to give him the ability to participate in class.
He’s only been using it for a few weeks, but so far, Castillo is loving it.
“I feel like I’m a part of the class. It’s been pretty nice,” he said. “My favorite thing is still being able to interact with my friends and socialize with them.”
Those friends – new and old – are very important to Castillo, who greatly enjoys the opportunity to socialize. It’s not uncommon for him to meet classmates outside as they walk home from school. Oftentimes, Castillo runs into kids he has only met while using the robot, but that doesn’t stop him from striking up a conversation.
“I see them sometimes around the neighborhood and say hi,” Castillo said. “A lot of times they don’t recognize me, but I tell them that I’m Max and they start talking to me. It’s really fun to be able to make new friends.”
Camielle Dickey is Catillo's case manager at CMS. One of her main responsibilities is to addresses any concerns or issues from Max, his parents, his teachers, or his classmates. At first, Dickey and her team at CMS thought it might be difficult for other students to learn with the potential distraction of a robot in the classroom. What they found out, however, was just the opposite.
“Max’s classmates didn’t think twice about it and were very excited to be in his class,” Dickey said. “Everyone has been very accepting. The best part is that the students see Max as one of their classmates."
While the social aspect is certainly important, it’s far from the only benefit this robot has provided. The Beam has also enhanced Castillo’s ability to learn.
In previous years Castillo could only enter certain classrooms within the building, and even that was not always easy. His hyper-observant nature led him to noticing things like bits of fur on clothing or crumbs on a desk. That’s all an afterthought now, according to his mother, Alya.
“Now he doesn’t have that level of anxiety,” she said. “That translates to him being more relaxed in general and not having to worry about all of that.”
Alya and her husband, Ted, have been thrilled with the results thus far. Their son is getting A's on his homework and Max is finally able to attend assemblies or after school activities in the library or gym. The Beam has also allowed him to continue to be part of the District’s Project Tree gifted program, and even gives Castillo the chance to be in the CMS choir.
Overall, the use of the robot has given Castillo the same all-inclusive experience afforded to every other Evergreen Park child, which is of the utmost important to his parents.
“He’s learning the same thing the other kids are at the same time,” Alya said. “For the District to step up in this way so that Max can have the best experience possible, it means the world to us.”