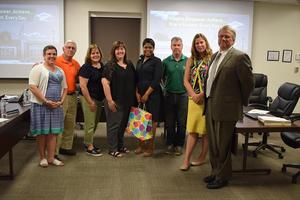 Ms. Michelle Reed comes to D124 from Brooks Middle School in Oak Park, where she served as an assistant principal

The Evergreen Park School District 124 Board of Education has approved the hiring of Ms. Michelle Reed as the principal of Central Middle School.

Reed comes to D124 from Gwendolyn Brooks Middle School in Oak Park, where she has served as an assistant principal since 2013.  Before arriving in Oak Park, she had previously held administrative positions in Skokie and Evanston.

Reed earned her master’s degrees in Elementary Education and Educational Leadership from DePaul University, and a bachelor’s degree in Sociology from Tennessee State University. She has also collaborated with researchers from John Hopkins and Northwestern Universities to examine racial and ethnic disparities in public education.

Reed will officially begin her tenure as the CMS principal on July 30, though she has expressed a desire to begin meeting with parents, students, and CMS staff members as soon as possible.