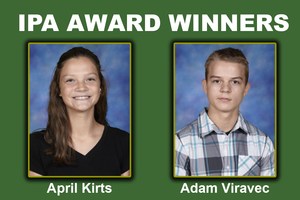 Kirts is known for her overall kindness and is a member of the CMS Pros, which allows her to introduce and mentor new students. She is also a member of the National Junior Honor Society, maintaining a 3.6 GPA and completes community service hours. Additionally, she was voted by her peers as the Heart of Central, is a part of the Student Leadership and SADD groups, and plays volleyball, basketball, softball, and soccer.

Viravec has been an outstanding member of the band program for the last four years. He started band at Northeast School in fifth grade, and by the middle of the year he skipped a grade and was promoted to sixth grade/intermediate band. He plays alto, tenor and baritone saxophones and, for the past two years, he has been a strong leader in both Concert Band and Jazz Band. He has earned several Division 1 medals at the Solo and Ensemble contest and is skilled at improvising his own solos in the jazz band. Viravec is also a member of the NJHS.

Both students will be honored by the IPA at a Recognition Breakfast at the Odyssey Country Club in Tinley Park on May 4.