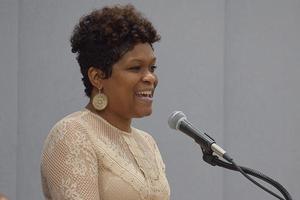 Michelle Reed has resigned as principal of Central Middle School in order to be closer to her family.

Reed will be moving out of state to relocate near her daughter, who is going away to college in the fall. While her tenure at Central was short, she said her time spent with the kids will leave a lasting impression on her.

“I greatly enjoyed the opportunity to impact the lives and educations of the students at CMS, and I wish them nothing but the best in the future,” Reed said.

Reed was hired as the CMS principal last summer, prior to the start of the 2018-19 school year. Under her leadership, the students' academic performance in reading and math increased over the previous school year at all three grade levels. Reed also effectively incorporated several new initiatives in the students' daily schedule.

D124 Superintendent Dr. Robert Machak said he is grateful for the leadership Reed provided during her time in the district.

“As a colleague, friend, and a true ‘middle school’ educator, Ms. Reed will be missed in District 124,” he said. “I wish Ms. Reed well in whatever plans her future holds for her family and her.”

D124 will now shift gears and begin to head down the path of selecting Reed’s replacement. That process will include collecting and reviewing feedback provided by the community.